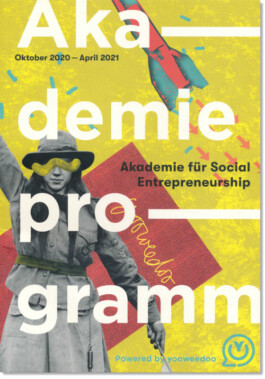 Markus Brüggemann, yooweedoo Academy of Social Entrepreneurship at the University of Kiel

This case is essential in my transition from film to UX design. After having taken the »Design Sprint Masterclass«, I tweaked the format to help the entrepreneurs in shaping and effectively communicating their business ideas.

The first sprint dealt with building the talking points of the businesses, developing narratives and assessing the possible means of visual communication. The second was about learning the gist of the craft, the third one a test screening to discuss results and define ultimate steps.

In-between sessions, the participants were writing, planning and producing the films with their own equipment. 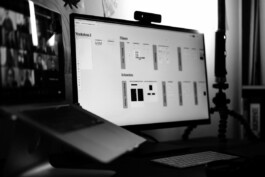 The start-up teams consisted mainly of M.A. graduates who had developed their ideas in the yooweedoo academy. Though these ideas were still in the making, we anticipated that 5-6 ideas would be ready to use film as a solid marketing tool. Our goal was to complete the films for an idea contest – the winners would get financial and consulting support.

Spoiler: the winning team was among the participants of the workshop.

The challenge: how to teach the complete production of a project film in such a short time? Film is a multi-layered endeavour that merges a variety of components: storytelling, writing, image creation, editing, sound, etc. But:

At the centre of a project film, there is nothing filmic – only ideas, content and purpose. It’s critical to have excellent knowledge and self-reflection about a project’s characteristics.

So the workshop’s first session would be most important for the participants to create content and deeper knowledge about their products – and regarding the audio-visuality that might be suitable for presenting it.

Nine teams, nine projects: to facilitate the process, I created a large Miro board with a »rail« for each group. The participants collaborated in the app; we conferenced over Zoom. On the yooweedoo side, Markus Brüggemann was present to give context and comment when needed.

I was slightly afraid that a new tool and the vastness of the board might intimidate people, so I wrote a lengthy introduction including an exercise, which was too much in hindsight. People were eager to start and onboarding is no fun.

I would move along my own rail, briefly discuss a topic and prompt the participants to gather the respective data. I entered the break-out rooms to assist if needed. From the emerging data pools, the most important bits were chosen, then on to the next topic. Slowly but steadily, the database of each project was growing.

Minor problems came up when participants were unfamiliar with design thinking or business terminology. Although I strived to tone it down as much as possible, there were still some bits and pieces that lacked self-explanation. On-the-fly translations helped to get everyone back on track. 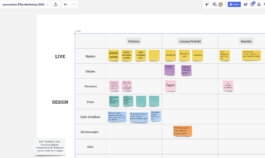 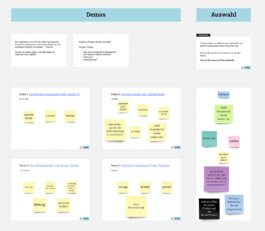 The next block started with the participants viewing four demos of image films, highlighting different approaches to audio-visual communication:

The teams had to evaluate the pros and cons of the formats and got some inspiration to choose from – depending on resources, capabilities, interests, strengths, equipment, friends. The whole section was about finding an approach that is actionable.

It was essential to frame the demos as repositories from which the teams could pick components to tell their own stories.

The final step of the first session (which was more of a do-later homework task) was to bring everything into a narrative. The participants took their sticky notes and placed them in a timeline that provided the basic sequences of an image film.

Now each team had talking points, goals and CTAs, the format of the film and an outline of the storytelling. Their next step was to refine the narrative, write a script, and plan the movie's production.

Sitting on top of that knowledge, the participants would learn about the gist of the craft regarding the format they chose. This part of the workshop was rather classic teaching.

The session’s side quest was to strengthen the confidence of the participants. Use your equipment fearlessly, redo if necessary.

In film, a test screening is the closest match to a usability test. I provided a few questions to check on whether the project films had succeeded in delivering what they wanted.

The participants took the role of the audience for the other teams’ projects films. Although it’s hard to generalise the findings due to the diversity of the formats, the screenings helped greatly in two regards: in giving feedback on emotional responses and in discussing text and communication flaws. 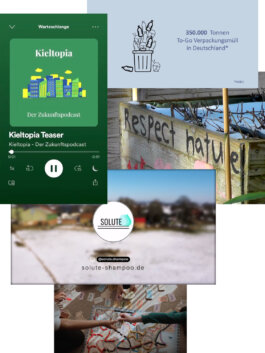 I was happy that five out of nine teams managed to deliver films that had progressed really far, were convincing and good-looking, too. That was more than we expected.

In hindsight, the scope of the workshop was a bit too broad. In a short amount of time, teams can either forge their business talking points or learn the craft.

Nevertheless, these teams finalised their videos in a further iteration and improved their results once more. One of the teams (rematter) won the said idea contest against 22 competitors.

Personally, the workshop was a crucial step in my shift towards design thinking. I especially enjoyed the first session: talk to people, gather data, frame problems and help to find solutions. The third session was equally important: one, for seeing the outcomes of the facilitation and two, for being able to hear and conduct the feedback from a genuinely interested, open-minded, friendly and critical audience.

I use cookies on this website to see how many people are visiting and what they look at – for that I use Matomo Analytics, which is a bit nicer than the big G. I also embedded some videos from Youtube and Vimeo, so most likely they will track you, too. By clicking “Accept All”, you consent to the use of all the cookies. But you may visit "Cookie Settings" to provide a controlled consent.
Cookie SettingsAccept All
Manage consent

This website uses cookies to improve your experience while you navigate through the website. Out of these, the cookies that are categorized as necessary are stored on your browser as they are essential for the working of basic functionalities of the website. We also use third-party cookies that help us analyze and understand how you use this website. These cookies will be stored in your browser only with your consent. You also have the option to opt-out of these cookies. But opting out of some of these cookies may affect your browsing experience.
Necessary immer aktiv
Necessary cookies are absolutely essential for the website to function properly. These cookies ensure basic functionalities and security features of the website, anonymously.
Functional
Functional cookies help to perform certain functionalities like sharing the content of the website on social media platforms, collect feedbacks, and other third-party features.
Performance
Performance cookies are used to understand and analyze the key performance indexes of the website which helps in delivering a better user experience for the visitors.
Analytics
Analytical cookies are used to understand how visitors interact with the website. These cookies help provide information on metrics the number of visitors, bounce rate, traffic source, etc.
Advertisement
Advertisement cookies are used to provide visitors with relevant ads and marketing campaigns. These cookies track visitors across websites and collect information to provide customized ads.
Others
Other uncategorized cookies are those that are being analyzed and have not been classified into a category as yet.
SPEICHERN & AKZEPTIEREN